Romania is a country located at the crossroads of Central, Eastern, and Southeastern Europe. Romania is the twelfth-largest country in Europe and the sixth-most populous member state of the European Union. Its capital and largest city is Bucharest, and other major urban areas include Iași, Cluj-Napoca, Timișoara, Constanța, Craiova, Brașov, and Galați.[1]

The country was formed in 1859 through a personal union of Moldavia and Wallachia. The new state, officially named Romania since 1866, gained independence from the Ottoman Empire in 1877. In the aftermath of the First World War, Bukovina, Bessarabia, Transylvania, and parts of Banat, Crișana, and Maramureș became part of the Kingdom of Romania. Bessarabia and northern Bukovina were lost after World War II.[1]

During r/place 2022, the Romanian reddit community created two main flags, however these flags were destroyed by Polish streamers in the last day. Only several smaller flags survived until the Great Whiteout. 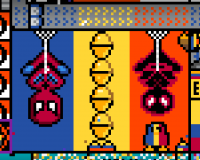 During the first day, while the Romanian flag was being expanded, "The Hive Mind" of the Ukrainian flag took over a good portion of it. On the same day, the Romanian and Hungarian flags were expanded over the r/furry_irl logo.

After the Ukrainian flag had stopped, the Romanian flag was also expanded over its territory, while preserving the artwork of several communities such as the Half Life 3 logo, Adventure Time and the TNO Mod logo.

On the second day, after the canvas expansion, a second smaller flag was made. This flag was attacked by the void but it survived with the help of the streamer Rubius.

On the third day, a Polish streamer attacked the main flag and destroyed it, replacing it with a Polish flag. After the attack started, a post was made on the main subreddit requesting help to stop the streamer and rebuild the Romanian flag and the communities it hosted, gathering a lot of support.[2]

For retaking the flag, the Anti Void Alliances organized an event on discord, and together with the help of several other communities, the Romanian flag was restored and reconstruction began.

The flag under reconstruction, while also expanding

The reconstruction took the rest of the day. During this time, the flag was also expanded over the place taken by the streamer which had been destroyed.

While most of the Romanian community was asleep, the Guatemalan flag expanded over the territory taken the previous day from the Poles. This territory was taken back by the Romanians, first being decided to leave the Guatemalan artwork intact but soon everything being taken over. An agreement was reached with the Guatemalans to help them relocate after the Dacia car artwork, which was to be built on the taken back spot, was completed.

However, the Dacia was never completed as another Polish streamer attacked the flag, destroying it yet again.[note 1] While the attack was happening, the Nordic Union took the opportunity and invaded the Hungarian flag, while Azerbaijan took a portion of the Romanian flag.[note 2]

Trying to retake the flags

In the evening of the last day, iRaphahell, a Romanian streamer, tried to help retake the flags. However, as he did not know of the Romanian community's alliances he expanded the Second flag over some of them. Soon, a representative from the Romanian community managed to get in touch with him for better coordination.

All this effort was however not enough to take back the flags. The biggest achievement of the attacks were the destruction of the crude Winged Hussar artwork made by the Polish streamers who had also joined in. Relocations of the flag were also tried, but each flag was destroyed by the Poles.

Before the end of the event, only a few smaller Romanian flags scattered throughout the canvas survived:

The longest lasting alliance of the Romanian community was that with Hungary. The two made a friendship ribbon together and helped each other to build and defend.

Alliances with other communities also existed, such as:

The community was also part of the Megaman Accords founded by r/Israel and r/Megaman.

The Romanian flag and artwork on r/place 2017

In the 2017 event, the Romanian flag featured a flagpole with a golden aquila on top, which was added before the upward expansion of the flag; a vampire snoo, which replaced a more human looking vampire just before the end; a banner with the text "Romania", and a friendship heart with Hungary.