r/furry_irl is a subreddit dedicated to furry memes. It participated in both r/place 2017 and r/place 2022.

The r/furry_irl “Yiff me Daddy!” Mural

This trifeather emblem drawn by r/avali represents the global government that the Avali race live under.

The logo of Bad Dragon, a manufacturer of fantasy adult toys.

The logo of the mature imageboard e621.net.

A picture of an avail, a fictional species of feathered raptors

The pixel snoo of the r/furry subreddit, and a hidden amongi

The r/furry_irl Snoo with the words “uwu” and “owo”

This is a drawing of the r/protogen Snoo

The Rainbow Paw constructed by members of r/furry_irl

The Rainbow Paw (2022) was located on the coordinates (364, 233). It was created by members of r/furry_irl after Mizkif voided the r/furry_irl Snoo. It was fully completed at around 16:37 on r/place. It eventually managed to get fully destroyed at around 26:08 when the Ukraine flag and “The Void” both invaded it. 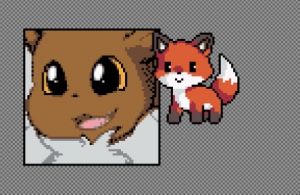 Sam the Eevee was a proposed piece of artwork located on the coordinates (1232, 1443) that was being worked on by members of r/furry_irl. The artwork was a pixelated picture of Sam the Eevee, the main character of the adult comic series, Oversexed Eeveelutions by Kuroodod. The artwork started being built when the canvas expanded for the second time(Around 54:46). The artwork would unfortunately get fully destroyed at around 56:00, when the “Checkerboard Pattern” to the north of the artwork decided to invade the artwork. Members of r/furry_irl managed to only complete about 10% of the artwork before it was fully destroyed.

These two subreddits allied with r/furry_irl on the first day of r/place, after their NATO flag on Operation Rochambeau got vanadalized by Mizkif, who was the same person that voided the r/furry_irl logo. With this alliance, all three subreddits managed to take back their artworks from Mizkif. Later on, r/neoliberal & r/NonCredibleDefense would help defend and rebuild the r/furry_irl Snoo after Mizkif and his chat nuked it on the 2nd day of r/place, and r/furry_irl would later help defend and rebuild the “Just Tax Land” banner from r/azerbaijan, and “Swedish Rouges”

Mizkif is a Twitch streamer that voided the r/furry_irl Snoo 5 times, on two separate streams. The first time he voided it, he tried to put a TriHard emote, the Mizkif Egg, and the OTK logo over it. However the second time, was actually his chat nuking it without an order from Mizkif. The remaining three times he voided it, was just because he wanted to mess with the furries, he didn’t even plan to put an artwork over the Snoo that time. He eventually decided to stop attacking the r/furry_irl Snoo, once he realized that Osu was allied with r/furry_irl, and that Osu was mad at them. Thankfully, Mizkif did not notice r/furry_irl’s other artworks like the r/furry Snoo, the e621 logo, and the Bad Dragon logo, even though he zoomed in on the area where they where. Mizkif was also the streamer who aided xQcOW with the Kobe Bryant artwork which covered up the r/furry Snoo and the entire Middle Eastern Alliance (MEA).

Zoil is a small British Twitch Streamer that tried to void the r/furry Snoo, and replace it with “Talking Ben” during 73:11-73:26 on r/place. However because of his low concurrent viewers, the strong number of furry defenders, and because the r/furry Snoo was allied with the Middle Eastern Alliance (MEA), he was unable to take it over. This defeat not only humiliated Zoil and his chat, but after that battle, he decided that he would stop participating in r/place for the remainder of the last day.