Touhou Project (東方Project), often shortened to just Touhou (東方), is a series of bullet hell shoot 'em ups developed by Japanese developer ZUN. Originally conceived in 1995 and first released in very limited capacity in 1997, the series would end up garnering a massive fanbase, particularly after the release of the soft reboot and first Windows release Embodiment of Scarlet Devil. The series takes place primarily in Gensokyo, a land closed off from the rest of Japan where mythological beings from various cultures, usually in the form of numerous different youkai, gather due to its far more traditional culture compared to the Outside World. The series primarily follow the shrine maiden Reimu Hakurei as she resolves to solve various "incidents" through danmaku battles. Despite this, every game since the third has had multiple playable characters, almost always including Reimu's friend and rival Marisa Kirisame. While ZUN has continued to develop new official media for the series since its debut, Touhou is said to be driven by its massive amount of doujin content from fans. This includes a wide range of fangames, musical arrangements, artwork, print works, memes, and even several fanmade anime series. Some have claimed that "Touhou is forever" due to this seemingly endless slew of fanworks. While much of the series' popularity is situated around ZUN's home country of Japan, there is a significant cult following among international fans.

The r/touhou subreddit is fairly popular, having over 100,000 members at the time that r/place 2022 took place. This led the series to have significant presence in both the 2017 and 2022 versions of r/place. 2017 featured a fairly huge section labelled as "r/Touhou Hijack" displaying sprites of various characters from the series. Touhou's presence would only grow further in 2022, with various pieces of art being included across the campus.

A reddit post by u/VNGamerKrunker was posted at r/touhou subreddit which was the first post to gained attraction to r/place. There were some idea and plans but none survived. Asyln checked r/touhou and communicated with VNGameKrunker to contact the moderators and begin coordination. Asyln later decided to create a Discord server(Touhou r/place) as a temporary place for better coordination. Catowong, moderator of r/touhou, makes the r/place megathread featuring Asyln’s Discord server, essentially making it official.

Cirno as she appeared at different times: the first couple of hours, midway, after getting a tan, and after moving.

Cirno is an ice fairy who first appears as the Stage 2 boss in Embodiment of Scarlet Devil. While initially seen as nothing more than an obstacle in this game, she would grow to become one of the most renowned and popular characters in the entire series. She is presented as being childish and unwise, which isn't uncommon for her species. A very common joke around her stems from a joke by ZUN in the manual for Phantasmagoria of Flower View, where one part simply labels her as "⑨.baka" (baka being Japanese for "idiot"). Despite being a fairy, who are often treated as the weakest youkai, she often claims to be "the strongest". Cirno would go on to make a fair amount of appearances in later installments, including playable appearances in Phantasmagoria of Flower View, Hisoutensoku, Hidden Star in Four Seasons, and her own starring game Fairy Wars. She has been in numerous fan works even by Touhou standards, with her most popular role being in the IOSYS music video "Cirno's Perfect Math Class", which plays off her perceived stupidity. Cirno's popularity did wane some in the early 2010s, but found new life toward the end of the decade, particularly around the popular Fumo line of Touhou plushes.

The art featured on r/place was created by pxls.space right under the huge OSU logo. It was protected by r/touhou and the Touhou r/place server for most of the event. Her skin was temporarily changed to give her a tan around the 46 hour mark, in reference to her appearance in Hidden Star in Four Seasons. She was destroyed a couple times during the event, but was able to be either repaired move without much trouble due to her small stature. The most notable of these moves was to make space for a larger sprite of Alpha-chan from Animdustry, leading her to be located above her head for the remainder of time until the whiteout. 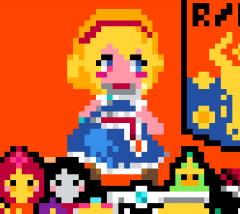 Alice, shortly before her final destruction.

Alice Margatroid is a full magician youkai who originally debuted as the 3rd Stage boss in the last official PC-98 Touhou game, Mystic Square, also appearing as a harder boss at the end of that game's Extra Stage. She has the ability to control and manipulate dolls, which she makes use of in combat. The vast majority of PC-98 era content has been ignored by ZUN since the release of Embodiment of Scarlet Devil (the start of the "Windows era" of Touhou), but Alice is one of the few characters to have directly appeared during the new era alongside Reimu, Marisa, and Yuuka Kazami. She made her redebut once again as a 3rd Stage boss in Perfect Cherry Blossom and has made some other official appearances since then. Outside of official media, she is a fairly popular character, often being paired with the human magician Marisa. This has been emphasized by her role in various fanworks, including as a playable character in Super Marisa Land and in the popular IOSYS music video "Marisa Stole the Precious Thing".

This art was among the first to appear representing the Touhou series, being placed on Romania's flag. This was done due to some perceiving her to have Romanian origins, with her belt colors even being changed to reflect this relationship. The sprite was unfortunately destroyed twice throughout the event by a Polish streamer attacking the flag. She was repaired after the first attempt, but never recovered after the second. Thus, she was unable to survive until the moments leading up to the whiteout.

Koishi Komeiji is a satori who closed her third eye due to the hatred she felt stemming from a satori's natural ability to read minds. This had dire side effects, however, most notably the loss of her conscious mind. This caused all her actions to be taken subconsciously and makes it so that people will usually forget her immediately after an encounter. Koishi was designed to compliment and contrast her sister, Satori Komeiji, with the two's color schemes being mostly inverted from one another. Initially introduced as the Extra Stage boss in Subterranean Animism, she would eventually grow to massive popularity in the early 2010s, particularly after her playable appearance in the official fighting game Hopeless Masquerade by Twilight Frontier. Many were attracted by her childlike and carefree personality, with many fans interpreting her as insane and unpredictable. This would be reflected in various fanworks both in positive and negative manners, most infamously in the crudely drawn psychological horror series of videos known as "Koishi Komeiji's Heart-Throbbing Adventure".

The art featured in this section is based on a fairly popular GIF of Koishi in chibi form bouncing. It was added by Twitch streamer tevin_vr, a fan of the character. It faced a couple of threats throughout the event, but managed to survive both. The first was one of xQc's attacks, which she managed to miraculously take little damage from despite massive damage to nearby art. The second was when the art bordering to the right, Computer Science House, made an attempt to expand further to the left. This was met with a lot of retaliation, with them eventually giving in and letting the art stay mostly intact until the whiteout.

Touhou LostWord is a gacha mobile game released in Japan in 2020 and globally in 2021. It features various alternate worlds in its story. One of these hosts a version of Marisa Kirisame where she became dangerously powerful after losing her version of Reimu and subsequently having her name forgotten. She was later added as an Ultra Festival unit known as Marisa Kirisame (Witch of Scarlet Dreams), whom is depicted here. Above her is a Power item, a common item collected in Touhou games used to power up characters.

This was a recreation of the desktop icon for Embodiment of Scarlet Devil, one of the most popular and influential games in the series. The icon joined various others at the bottom of the canvas in the r/placestart taskbar. It features a picture of Marisa Kirisame, who would be used for this role in all whole numbered future Touhou games (the games with traditional bullet hell gameplay).