The Central Alliance, formerly the South-Southeast Alliance [SXSE] or the South-Central Alliance [SXCA] was one of the largest coalitions for several small communities near the center of the canvas. At its height, it spanned roughly 81,221px2 across the entire canvas. It was one of the few organizations to have actually held against a raid by the infamous Twitch streamer xQcOW There were several smaller alliances that were a part of the Central Alliance at large, however, most of the support came from the overall coalition. It started within the opening hours of r/Place as a union between the alliance between the Destiny 2, Barca, Rust, and Critical Role communities and the Animation Alliance, but due to its defensive success, popularity, and eventual infamy from holding back xQc, it rapidly expanded to become one of the largest coalitions on r/Place.

In the first few hours of r/place 2022, the Destiny 2 community (r/destinythegame, r/destiny2) secures a spot and creates a "Ghost" near the south-by-southeastern corner of the canvas. Soon after the FC Barcelona (r/Barca) community creates their logo directly above the Destiny 2's Ghost. A truce is formed between the two and both communities decide to use a colored lattice background to represent their alliance. Shortly after, Avocado Army appears within Barça's designated square and establishes peaceful relations with them and Destiny 2.

As the three communities solidify their designs concerns rise about the "Hooty" (an owl with a long snaking body) being formed by The Owl House (r/theowlhouse, also parterned with Amphibia) community above Barça. The Hooty, being formed by what was later called the "Hooty Hivemind" (a section of The Owl House dedicated to expanding Hooty, trudging along blindly but diligently due to being disconnected from main TOH communications), was taking over the surround area and started infiltrating into Barça's and Avo Army's space. Panic stirred as the Hooty Hivemind had quite a bit of momentum and the alliance went into full defense mode, as well as trying to contact TOH. After defending against the Hooty Hivemind for a short time, communications were established between The Owl House and the alliance, and a truce was formed.

Side note: In its conquest, the Hooty Hivemind took over: a small Pepe, PewDiePie's original claim (which was also taken over with the help of the alliance), and both attempts at a Swedish flag, before finally ending in a small bird house within Smiling Friends' (r/smilingfriends) territory.

Around the same time the Hooty Hivemind was being dealt with, Destiny 2 decided to expand out directly to its right and form the logo for the "Witch Queen" expansion, the newest expansion for the game (released 02/22/2022). At the same time Destiny 2 expanded downwards to the bottom edge of the canvas with yellow lattice, taking over the small StarKids logo and adding the names of the two main Destiny 2 subreddits: r/destinythegame (abbreviated as r/DTG) and r/destiny2.

Early on during the downwards expansion, Rust (r/playrust) snuck in and placed their name under the Witch Queen logo. Destiny was slightly divided about what to do about this, as people did not want to interfere with Rust and wished to let them be. However, others continued to expand the yellow lattice, and after a short skirmish Rust was taken over.

Plans were In the works to expand once more to the right and plant the main Destiny logo (referred to as the "Tricorn"). However, the Critical Role (r/criticalrole) community managed to claim that space first. The two formed a truce, and the alliance had yet another powerful member added to its roster.

As an act of friendship, Destiny 2 and Critical Role decided to collaborate on a dodecahedron above the Critical Role logo. In Destiny, rewards are collected from glowing dodecahedrons called "Engrams", and in Critical Role a dodecahedron is the shape of a type of twelve-sided die, also known as a D12. The space for the collaboration was at the time occupied by PewDiePie, however with the TOH community (the Hooty Hivemind specifically) the space was taken over easily.

On the left, next to the D12, a broom was created as a reference to Destiny 2's side community of OOB exploration, datamining, secrets, and the like, known collectively as RaidSecrets (r/raidsecrets). The broom is in reference to a NPC in Destiny and Destiny 2, known as Sweeper Bot. RaidSecrets has an affinity for this character, and thus requested Sweeper Bot's broom to be added next to the dodecahedron.

The last day of r/Place went with not much incident for the Central Alliance, as it finalized its claims and projects. It was one of the last communities to succumb to the anti-void at the end of the experiment. This is perhaps one of the least notable days for the Central Alliance, beyond its expansion approximately 9 hours before the end to finally encompass over four times its original size.

- As of the Finale of r/Place and The Great Whiteout these communities were all members of varying Degrees to the Central Alliance, despite their original location of Western, Eastern, or External Territory in the Central Alliance Block. With the Western being part of prior alliances of the Mid Southwest Alliance and the Chang Gang. Or the Eastern Block With the SXSE and the later Central Alliances direct Homeland.

Known Truces as of the Finale

A good deal of these Hostilities never have official resolutions despite concluding in some fashion, and as such remained as hostilities until the end of the event and the writing of this article.

While the Central Alliance was primarily a defensive alliance against streamers and other territorially hostile communities, it was also home to a degree of strategy and planning that was crucial to and remained important to the overall endurance and credibility of the alliance. That being said expansions were planned

After the 2nd Day Canvas Expansion, due to the Alliance (At the time the SXSE) having been poised in a strategically ideal position for the next expansion, underwent several planning programs as well as negotiations for the new space, as well as requests for the alliance to extend downward into the at the time "new space". While the nature of Place prevented everything in these plans from being followed through to absolute perfection the alliance did there best to use these plans to coordinate and adapt despite things not going to plan and some communities parting ways. 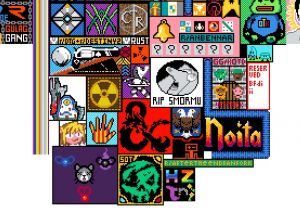 A Conceptual Plan for the Central Alliance's next move for the 2nd Canvas Expansion. (At the time the Alliance was still technically the SXSE Alliance due to the Canvas current status.

- The First Image contains a variety of plans and factions that did not end up in the final product due to the overall circumstances that r/place ended up creating. A few of these being listed with slight bit of Information. While looking at this image it is important to realize that while the alliance sought their best to reach this image, it was all individual subcommunities members duty to establish their communities as best as possible during the "land grab" or 2nd Canvas Expansion. Additionally not ever community in the alliance agreed harmoniously on such plans and many things were changed on the fly.

Potentially can be known as the Streamer Kill Count.