Taiwan, officially the Republic of China (ROC), is a country in East Asia. It sits at the junction of the East and South China Seas in the northwestern Pacific Ocean, neighboring the People's Republic of China (PRC) to the northwest, Japan to the northeast, and the Philippines to the south. The territories controlled by the ROC consists of 168 islands with a combined area of 36,193 square kilometres (13,974 sq mi). The main island of Taiwan, formerly known as Formosa, has an area of 35,808 square kilometres (13,826 sq mi), with mountain ranges dominating the eastern two-thirds and plains in the western third, where its highly urbanised population is concentrated. The capital is Taipei, which, along with New Taipei City and Keelung, forms the largest metropolitan area of Taiwan. Other major cities include Kaohsiung, Taichung, Tainan, and Taoyuan. With 23.45 million inhabitants, Taiwan is among the most densely populated countries in the world.[1]

Taiwan's r/place community (coordinated through r/Taiwan in 2017 and 2022, r/placeTW established after r/place 2022) was the largest Taiwan-related community operating on r/place in 2022. This community is mostly aligned with the Pan-Green Coalition in Taiwan.

Taiwan began its r/place journey in 2022 following a post by u/gsdeman on r/Taiwan[2]. A subsequent "red blob" was initialized by u/skyblocker804 at (942, 568)[3], and an initial design of a flag of Taiwan (ROC) was created shortly after[4]. Shortly after, u/wusterdam_www (wusterdam) created a Discord server to coordinate Taiwan's efforts on r/place, with u/howardt12345 (ht12345) being the second person to join. AvocadosConstant joined shortly after, establishing a Google Sheets with the proposed design for better coordination.

Taiwan's first flag was established shortly after the beginning of r/place 2022 following a post on r/Taiwan from r/gsdeman[2]. 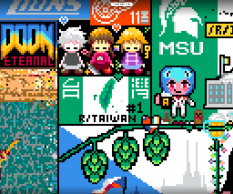 The final iteration of the Taiwan Independence flag.

The "Taiwan independence flag" is a flag made by the World Taiwanese Congress, and is the most common flag used by Taiwan independence supporters. The original design was informally proposed by ht12345 as an attempt to swap the design of the ROC flag with it[6] mere minutes before the first canvas expansion. It was established to be the design Taiwan would make in the first canvas expansion shortly after.

After failing to secure a location beside the XjPooh and the Brazilian flag, Taiwan decided to establish the flag to the left of the flag of Ireland and above the Czech flag. This led to the establishment of an alliance with Ireland and strengthening the existing alliance with the Czech. 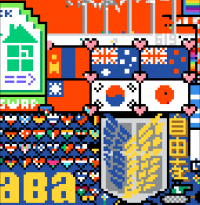 The East Asian Trio, with the flags of Mongolia, Australia, and New Zealand above it.

The "East Asian Trio"[7], also referred to as the Asian Trio, was a group of the flags of Taiwan, South Korea, and Japan between Ukraine and the Denmark area of the Nordic Union.

Approximately a day after r/place started, a flag of Japan was noticed to appear at (316,158). It was quickly joined by a flag of South Korea to the left of it. Members from r/china place sought to establish a flag of Taiwan beside South Korea, which was completed shortly after. However, this led to a dispute between the Taiwan and Korea communities, as Korea originally planned to give the space to their left to a Tunisian flag. The Taiwan community was mostly in favor of Taiwan giving up its flag there, however there was slight opposition to the consensus by a member of the discord. The first canvas expansion happened shortly after, diverting everyone's attention away from the area and leading to the flag of Taiwan staying in that area. 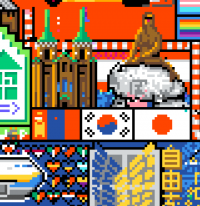 The East Asian Trio at the end of r/place, with a heart in the design of the flag of Taiwan under Mongolia.

A flag of Mongolia appeared on top of the Taiwan flag at the East Asian Trio, which was repeatedly destroyed by the Nordic Union. Taiwan served as a mediator role between the two communities in their dispute, who both proposed that Taiwan give the flag at that location to Mongolia. Significant amounts of time were spent by a representative of the Taiwan community to negotiate a favorable solution for all parties, but eventually conceded to the original proposed solution in exchange for significant amounts of support for Taiwan. While met with limited opposition, Taiwan's community unaminously voted in favor of giving the flag to Mongolia, with 106 in favor and 0 against[8].

In the end, after some instability in the region, Taiwan was able to successfully give the flag to Mongolia with the help of a Mongolian streamer. On the final version of r/place, a heart in the design of the flag of Taiwan can be found under the flag of Mongolia, as part of the tribute to Ukraine.

One heart in the design of the flag of Taiwan could for the most part found in the heart flag area of the Ukrainian region, where flags of countries supporting the Ukrainians in the defense of their country against the invasion by Russia expressed their support. It was from time to time under attack, for example during a period of time where the flag hearts were attempted to be changed into Russian flags. The attacks were, however, defended against, and in the end, one could still see the flag of Taiwan, below and slightly to the right of where the flag of Taiwan in the East Asian Trio were originally to be found.

Hearts of Taiwan independence, Taiwan ROC, and Nigeria on the flag hearts chain between Ukraine and Romania.

When the flag of Ukraine spanned the entire canvas on the first day, a flag heart chain was noted by members of the discord. Taiwan sought to establish two hearts on the chain, one for Taiwan ROC and one for Taiwan independence, under the area of former Romania. The heart of Taiwan independence, originally on the right of Taiwan ROC, was for some time the target of Nigeria[9], who sought to convert the heart to the flag of Nigeria. Taiwan and Nigeria later established an agreement where Taiwan would cede the original independence heart to Nigeria and re-establish it on the left of Taiwan ROC in exchange for an alliance between the two communities[10].

These hearts were short-lived, as Romania seized the surrounding area some time after. 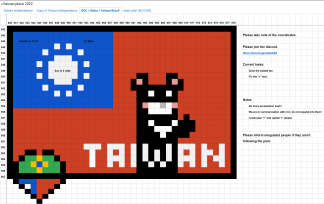 An example of a Google Sheets table used by Taiwan's r/place community to show coordinates of a given design.

Taiwan's r/place community decided early on to forego overlays and bots and instead used Google Sheets as the primary method of design and coordination. Cells on the table were made to be square, and colored in manually. The first row and column of a table were used to show the y and x axis coordinates of a given pixel. Every time a new design was finalized, it was sent in a dedicated announcements channel in the Discord. This method proved to be effective enough that it was used by Taiwan until the very end.

This method was flawed in that it took time for word of the latest plans to get out. This led to miscommunication with members outside of the discord, who remained diligent in defending the existing plans and inadvertently blocking members of the Discord from accomplishing the latest plan.

While some members of the community were known to use bots, it was not officially endorsed by representatives of the community until 2 hours before r/place ended, when Taiwan accepted an invitation to join Hong Kong's bot network.

Ideas for several automation tools, including a Discord bot to automatically generate various types of images given pixel art input[11] as well as an online portal to display all necessary information[12], were proposed as suggestions for the next r/place. The domain placetw.com is currently held by ht12345 for future use.