Yume Nikki is a Japanese surrealist horror game developed in RPG Maker 2003 by Kikiyama. Initially released with little fanfare in June 2004, the game would soon end up gaining considerable attention over its peculiar nature. The game follows a girl named Madotsuki, with the purpose of the game being to explore her wide range of strange dreams while encountering a variety of Effects that can be used on Mado. Many years after its debut, Yume Nikki has remained a cult classic online. It is often listed as one of the hallmark games made in RPG Maker, predating other popular games created with the tool such as OFF, OneShot, and Omori. It has also inspired a wide range of fangames, including the fanmade sequel Yume 2kki and .flow.

The subreddit for Yume Nikki, r/yumenikki, houses a quiet but dedicated community of fans. They would first come together to add Madotsuki onto the Swedish flag in the first incarnation of r/place in 2017. Later in 2022, there would be several attempts to once again Madotsuki onto the new canvas, with a section eventually being claimed and developed further over the remaining course of the event. This year would have members of the subreddit collaborate with the Indie Alliance, a collaboration between fans of indie games to help add and defend each other on the canvas.

Fans of Yume Nikki came together to create a small sprite of Madotsuki on the Swedish flag. This was met with surprised but very positive reactions from Swedish users, who found her cute despite many not knowing her origins. They would end up creating a similar sprite of Swedish children's book character Pippi Longstocking to accompany her on the flag, with the two holding hands to symbolize the new friendship between r/yumenikki and r/sweden. The two helped to defend each other throughout the remainder of r/place 2017, with both ending up together on the final canvas. 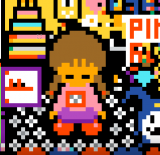 The initial attempt at Madotsuki shortly before being destroyed.

Several attempts to create Madotsuki on the campus occurred on day one. The most successful of these occurred on the east part of the expansive Ukrainian flag, with the completed sprite remaining for several hours. It would even have a bunch of white flowers placed around it for a short time, referencing the Sky Garden in Yume Nikki. In the end, a white blob would envelop part that part of the flag, including Mado.

There were other attempts to add Madotsuki onto the campus that didn't last as long. The most notable example was a miniature version of Mado built on the west side of the Ukraine flag rather than the east, later being deleted to make room for new artwork themed specifically around Ukraine. Other attempts included the design on Mado's sweater on the Algerian flag and another attempt at her sprite in the area then inhabited by the Toronto Blue Jays and Spelunky. 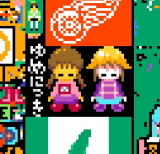 The first draft of the section.

After the canvas first expanded, there would be a new attempt to create Madotsuki around the top left corner of the new quadrant. This attempt was far more successful and would remain her general position for the vast majority of r/place 2022. Additional space right of her was later used to add Urotsuki from Yume 2kki, a well-renowned fanmade sequel to Yume Nikki. She initially suffered from severe bot attacks before later being reclaimed and rebuilt. There was initial confrontation between Yume Nikki and the Detroit Red Wings, but after a short scuffle the two would soon form a close alliance that would remain for the remainder of the event, with Madotsuki and Urotsuki being moved down slightly to accommodate the Red Wings logo. The uneven space to the left of the two girls was then filled by hiragana spelling out the title of the game (ゆめにっき, or "Dream Diary").

The section with Sabitsuki added.

After several attacks to the left of Yume Nikki's territory left a part of it unclaimed, the territory was expanded one final time. The hiragana was replaced by a sprite of Sabitsuki, the protagonist of another Yume Nikki fangame called .flow. A section based on the influential first-person shooter series DOOM would end up bordering to the left. A formal alliance was never formed, but the two remained on neutral terms for the remainder of the event. While this was the final major expansion, several small pieces of art would later be added referenced other fangames, particularly following revisions after several notable attacks. All three main sprites would also receive further recolors after the palette of colors was expanded for a final time, matching the originals far closer.

There was a short-lived attempt to recreate the rug from Madotsuki's apartment in Yume Nikki below the section for Omori in the bottom right quadrant after the final canvas expansion, but it didn't gain enough traction to come to fruition. This section was soon abandoned to focus on defending the main artwork. There were also several attempts to add other characters from Yume Nikki on parts of the canvas, including the mysterious entity Uboa, that also never came about.

While managing to avoid some of the bigger attacks from the likes of xQc or The Void due to the relatively remote position, there were several large attacks that occurred either near or on top of Yume Nikki. The first of these occurred from the streamer ___, who chose to expand his section twice over the course of the event. The first expansion mostly didn't affect Yume Nikki, but the second attack would lead to a clash between the two that would end with most of Sabitsuki being erased in the conflict. After a strong defense, Yume Nikki would manage to hold on from the attack, with ___'s attention being turned toward the Taiwan independence flag. After the attack subsided, the two allies would work together to repair the damage from the attack, with things seeming to go back to the status quo.

A second attack occurred with around 16 hours left to go in the event, this time by a gigantic rogue Turkish flag that seemed to come from popular TikTokers from Turkey. (r/turkey confirmed several times that this flag was not associated with them.) The attack was hard and had most of Yume Nikki, Taiwan, and DOOM consumed by red pixels. The flag soon received a lot more retaliation, particularly from the nearby Czech Republic flag. After a very hard battle, the attackers were driven off and Yume Nikki was once again repaired with a few more small additions.

The final and most direct attack on the territory occurred later into the final day, when a rogue streamer chose to attack the space simultaneously occupied by Yume Nikki, the Detriot Red Wings, and the Detriot Lions. The attack was first noticed when several white pixels began to suddenly gather on top of the Yume Nikki section, with them soon multiplying to a massive degree. Despite retaliation by Yume Nikki and their allies, the attackers were initially successful in consuming the entire territory. They would soon move on to consume most of the Detroit Red Wings logo and go after part of the Detriot Lions. The Lions would end up holding a strong retaliation against the attackers, with the various factions nearby working together to successfully restore the Lions' section. This was enough for the attackers to begin letting up, with the three factions helping to repair each other once more. After this, the heart marking the alliance between Yume Nikki and the Red Wings was rebuilt alongside a new heart between Yume Nikki and the Lions.

After these attacks, Yume Nikki was able to remain in relative peace up until the Great Whiteout. The section managed to remain for a decent chunk of time, with a number of Yume Nikki fans making jokes about the protagonists' looking similar to a number of Effects in their home games. 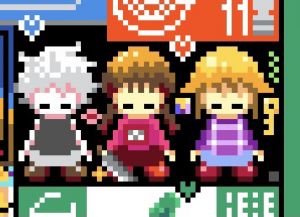 The main section based off Yume Nikki was formed during Day 2 and would slowly be improved and updated over the course of the event. The final piece features three protagonists from Yume Nikki and what are widely considered its most notable fangames, alongside smaller sprites featuring further references to other fangames.

r/yumenikki would form several alliances upon settling into its new position. The most notable of these was the Indie Alliance, which was formed to encompass many fans of indie games along with a few notable allies. Members of the dedicated Discord server would help to built new projects and defend each other from notable attacks, including those that would end up occurring against Yume Nikki.

Alongside this, several individual alliances were formed, primarily with nearby neighbors.

Yume Nikki ended up forming a very close alliance with Taiwan, who built the Taiwan independence flag right below the final section used by Yume Nikki. The two would end up becoming very close with one another, helping to defend during later attacks. r/taiwan was also allied with the Indie Alliance after taking notice of their new neighbors and sending diplomats over to the alliance's Discord server.

The Detriot Red Wings would end up becoming one of the strongest allies with Yume Nikki. The two initially had small fights over the border between where the two both wanted to build, with the bottom of the Red Wings logo overlapping the top of Mado's head. After this confusion was noticed, there was a deliberate effort to gradually move Madotsuki's sprite down in order to give the Red Wings more space. The two groups took notice of each other after this, with them helping to defend against attacks on each other for the remainder of the event. Later on, a heart was formed between the two to signify their friendship. While initially a little more elaborate in design, it evolved into a simple red heart by the end of the event.

The alliance between these two factions would also inspire a lot of positive interactions and even artwork based on the new alliance.

After they took over nearby territory when Halo's art was destroyed, the Detriot Lions were mostly on good terms by association with the nearby Red Wings. The final attack on Yume Nikki and the Red Wings ended with the two forming a new alliance signified by the blue heart on the two's border. This heart would also remain mostly intact for the remainder of time until the whiteout.

After these attacks, Yume Nikki was able to remain in relative peace up until the whiteout.

While not as proactive as the above, an alliance was formed between Yume Nikki and their neighbors to the right, Ireland. A huge flag had been formed next to the new territory, with the two seeking to meet on good terms early on. This would remain the case for the rest of the event.

There was an initial alliance formed with r/Halo when their piece featuring Master Chief and Cortana initially bordered the top left corner of Yume Nikki's territory. They would soon be forced to surrender after back-to-back attacks by a streamer's art and the Detriot Lions left the location unreclaimable, eventually moving to the bottom left quadrant after the final expansion of the canvas.