Dragalia Lost is an action role-playing game with touchscreen controls, where characters attack enemies with attacks of various kinds. The adventurers have different elements which can be weaker or stronger against other ones. Another method of attack is a special attack where the character transforms into a dragon and can greatly damage the enemy. This can be activated for around ten seconds when they have sufficient energy that can be collected while attacking or destroying statues of dragons. The characters also have their own classes, with attack, support, defense, and healing types. Each character has two skills (barring one adventurer), each of which charges up with attacking. Two additional skills can be chosen from a pool in addition to innate ones.

While the game is fully playable as a single-player experience, it also supports up to four-player co-operative multiplayer, and in Raid Battles, four teams of four. For one event, this mode was modified for each player to control one Adventurer, for a total of 16 characters.

Due to releasing a year after the first r/place took place, it wasn't featured in the 2017 canvas. Additionally, due to the game's End of Service announcement[1], r/place 2022 is prone to be the only iteration of the event during Dragalia Lost's lifespan. The community is also a member of the Gacha Alliance.

The latest rendition of the sticker as seen in the canvas

The first project undertaken by the community. It represents the in-game "Boom!" sticker that is available to all players. The sticker was introduced in the game as a conmemoration of Dragalia Life's 100th issue (a series of comedic 5-panel comics about the characters in Dragalia Lost) on 11th July 2019[2][3]. After that, it has become one of the most well-known stickers in the game.

The design in the r/place canvas was altered several times during its lifespan, such as changes to the DRAGALIA sidebar in order for it to be more readable and an alteration of the color scheme in order to take advantage of the expanded color palette introduced during day 2 and to portray the sticker more accurately.

Despite Dragalia Lost's niche nature, the sticker has remained from the time it was created till the end of the r/place event. Worth noting interactions with streamers such as MrMouton[4] (who confused the sticker for a Nyanners emote so he didn't end up attacking it to avoid pissing off their fans), Asmongold[5] or Cr1tikal[6] (both of which didn't end up deeming it as MLP stuff)

To its survival contributed as well the strong alliances from the Dragalia Lost community with the other communities in the Top Left Corner (most notably Runescape, Made in Abyss, Genshin Impact, PlaceNL and Attack on Titan, to name a few), the truces made with other factions such as the Nordic Union and the location's general lack of contention, especially once the canvas was further expanded in the opposite directions. 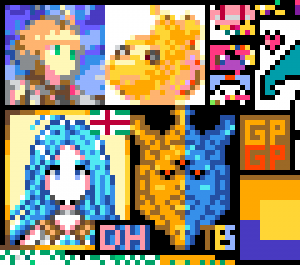 Euden and Squishum prior to raids

The community's next project would take place after the second canvas expansion, where a spot was secured in 1439,-1705 after several negotiations with the Morrowind, Granblue Fantasy, Tetris and Smaland communities. It consists of the app's icon (featuring Euden, aka the Prince, the self-insert main character) and a Squishum, a super-rare yet useless item in-game and a popular sticker. Originally the idea was to feature only the app icon along the other Gacha Alliance app icons, but due to difficulties during the negotiation, the community settled with the already-secured spot. Later on, Granblue Fantasy's Lyria, the Smaland flag and Morrowind's Dagoth Ur's face were added below.

However, the icons were voided by a russian streamer, which was right away voided by Auronplay (top Spanish Twitch streamer and one of the most viewed worldwide) building a FC Barcelona shield on a yellow background on that location. While he was focused on the France flag, the community, with help from their alliances, rebuilt the logos in record time, all the while having someone who knew a friend of Auron convince him to avoid building over the logos when rebuilding the FC Barcelona shield again.

But it was all for naught, because right before the whiteout began, a Mexican streamer named elmarianaa (mostly pressured by his chat) raided the place in order to build their logo, much to the dismay of the affected communities.[7]

However, they're still visible in non-final screenshots.