Blue Archive (Korean: 블루 아카이브 /Japanese: ブルーアーカイブ) is a role-playing game developed by Nexon Games (formerly NAT Games), a subsidiary of South Korean game company Nexon. The game is free-to-play with gacha mechanics. It was first released for Android and iOS by Shanghai Yostar (CN/JP) in February 2021 and worldwide in November that year by Nexon. The combat system of Blue Archive features a 3D real-time environment with chibi characters.

Blue Archive takes place in the academy city of Kivotos. The player takes the role of a teacher, called Sensei, who is summoned by the president of the General Student Council, a committee managing the schools, before her disappearance. Criminal activity rises following her disappearance. Sensei has the task to resolve the issues around Kivotos and help find the missing president.

Hifumi and Peroro, located at (188,964), is a piece of artwork that depicts the in-game character Ajitani Hifumi alongside the mascot Peroro. The artwork was originally Arona and Shiroko, before shortly being moved to (1649,442) due to a massive raid that wiped out the original artwork.

Definitive version of Arona and Shiroko

Arona and Shiroko, located at (1649,442), is a piece of artwork that depicts the in-game characters Arona and Sunaokami Shiroko. It was the first ever artwork on r/place created by the Blue Archive Community. Originally located at (188,964), the artwork was moved due to a massive raid that wiped it out. The artwork experienced 3 raids and 1 redesign during it's lifetime.

Blue Archive app icon, located at (1722,1713), is a piece of artwork that depicts the app icon for Blue Archive, sporting a zoomed in headshot of the in-game character Sunaokami Shiroko. This artwork is part of the Gacha Alliance app icons.

Miyu, located at (60,945), is a piece of artwork that depicts the in-game character Kasumizawa Miyu in her signature trash bin. This artwork shares the same plot as Maimai and Last Podcast On The Left. On the final minutes of r/place, Miyu as well as its surroundings was raided by Zerkaa, one of the Sidemen. The survival of this artwork is debated, as the official r/place final canvas shows Miyu completely overlapped from the raid, but most community final canvas' that are widely agreed upon[1] have Miyu intact.

Major alliances Blue Archive is a part of:

Other allies of Blue Archive:

The original design of Arona

Arona design v2 with r/BA underneath her

The original plan of base 2 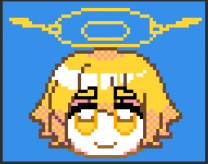 The original artwork of Hifumi 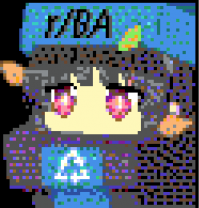 The original design of Miyu