This article is about the Arknights r/place community. For information on the game's app icon, see Gacha Alliance app icons.

Arknights Is a free-to-play mobile game with tactical RPG and tower defense elements produced by Chinese developer Hypergryph. The world of Arknights, known as Terra, is set in a post-apocalyptic setting where natural disasters, known as Catastrophes, ravage the land and leave behind a valuable material known as Originium. In Arknights, players take on the role of a researcher and field commander known only as the Doctor, who at the time of the game's start, has a very severe case of amnesia. As they are thrust into the heat of combat, the player must coordinate a number of humanoid characters with animal or mythological features known as "operators" of Rhodes Island, a pharmaceuticals company that also has acted as a self-defense organization with its own private army. Operators can contribute to battles in a variety of ways, whether it may through melee or ranged combat, the healing/support of other operators, and the use of magic known as "Arts".

Arknights was released in China on the 1st of May 2019, globally on the 16th of January 2020, and in Taiwan on the 29th of June of the same year. Because of this, the Arknights r/place community did not have a presence in the r/place 2017 canvas. The community is also a member group of the Gacha Alliance.

The first rendition of the Arknights text.

The first project undertaken by Arknights was a blue text that said "Arknights". At first, due to the small size of the canvas on the first day, it was shortened to r/AK (standing for Arknights) and it was accompanied by a chibi Amiya as well as a logo of Rhodes Island(symbolized by a blue triangle with a rook). When the canvas extended, the Rhodes Island logo was deleted in favor of more space, and the r/AK text was rebranded to "Arknights", where it stood until the end of the canvas. The chibi Amiya was also kept for a very long time, until it was intentionally removed so that a small Poland flag adjacent to it could extend its borders. The Arknights text has been attacked more than once from rouge bots of the r/CLTV (anti-Chinese community) subreddit that were trying to extend the Pooh art's ear, though the Arknights community has successfully defended against all of these attacks.

Originally, a logo for the Reunion movement (one of the game's antagonists) was placed above the Arknights text. The icon, which looked similar to a DNA strand, would then be abandoned in favor of the other projects. 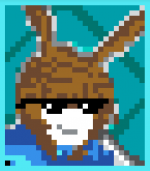 This project was intended as a pet project by one of the Arknights r/place community leaders in an attempt to alleviate the lack of activity from the group. Dubbed as "Swagmiya", "Smugmiya", and "Pogmiya", the simple artwork featured the game's mascot, Amiya, with a smug smile and a pair of sunglasses. Situated near the original Arknights text and adjacent to the Elden Ring/Hollow Knight artwork and below the Genshin Impact Chinese logo, the project was finished within 3 hours of the first pixel being placed. The artwork did face an attack by an unknown group of attackers towards the end of the canvas, but the Arknights r/place community did manage to restore the artwork back to its original state, where it stood with little activity until the end of the canvas. Occasional appearances of "crewmate" from the popular game "Among Us" have occured on Amiya's hair, which got quickly patched and when whiteout occured, no such sight was spotted.

At some point, blushing Amiya was introduced by adding 2 pink pixel on both of her cheeks, but was reverted by the community's decision to adhere to the planned design.

At this location, Arknights was allied with Genshin Impact and Poland Ball. 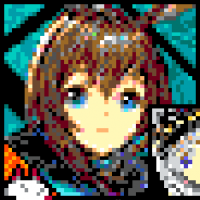 In a collaboration with multiple other gacha game communities in the Gacha Alliance, Arknights created its icon alongside the r/place communities of Girls' Frontline, Guardian Tales, Honkai Impact 3rd, Genshin Impact, and eventually Touhou LostWord, Uma Musume, Azur Lane, and Poland Ball. With the addition of Azur Lane overlapping parts of the Arknights icon as well as parts of the Blue Archive icon, some members of the Gacha Alliance communities have taken to calling it "The Yostar Trio" due to the games sharing the same publisher: Yostar Games.

The Arknights app icon itself featured Amiya, marking the character's third appearance in the entire canvas. The icon underwent 2 revision after its construction in an attempt to be more faithful to the actual Arknights app icon. Even after its completion, it saw many mistakes and independent trolling attempts, which were most concentrated on Amiya's eyes, nose, and mouth. Amiya's mouth was also a hot topic for debate amongst the Arknights r/place community, as there was a faction that wanted Amiya to have a smile, while another faction wanted to keep to the original by having her keep a neutral face. In the end, Amiya was given a smile before the beginning of the end of the canvas.