This article is about the video game and its community. For the game logo as seen on the canvas, see VA-11 HALL-A logo.

VA-11 HALL-A: Cyberpunk Bartender Action is a 2016 cyberpunk visual novel and bartending simulation game for Windows, macOS, Linux, PlayStation Vita, PlayStation 4, and Nintendo Switch; developed by Venezuelan indie studio Sukeban Games, and published by Ysbryd Games. Set in the year 207X, players take control of Julianne "Jill" Stingray, a bartender at VA-11 HALL-A, a bar in the downtown of the dystopian Glitch City; and, through Jill's day-to-day job, learn about the city through a wide cast of unusual characters who come to visit the bar.

Members of the VA-11 HALL-A community first began r/place operations in 2022, under the name of Operation Bad Touch, in reference to one of the drinks in the game.

The SLUT text as it first appeared in its original location.

The original Operation Bad Touch, the SLUT text was the VA-11 HALL-A community's first contribution to the canvas, appearing towards the bottom-left corner of the canvas and being completed by approximately 15:08. However, it was destroyed by the Void at 19:49, and its space was instead occupied by Technoblade Never Dies!. A second appearance next to Tux would also be short-lived, as it would be overrun by MIT.

The text would not reappear again until 50:05, being added underneath Dana and next to the Crrowd logo, with the help of the Girls' Frontline community. It would remain there until being contested by r/hearc, shortly before the Great Whiteout destroyed both of them. 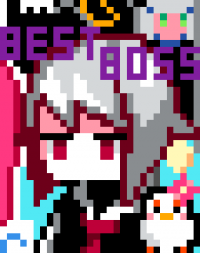 Dana as she appears on the canvas.

After assisting the Girls' Frontline community in creating M4A1, Dana Zane became the VA-11 HALL-A community's second addition to r/place as Operation Bad Touch 2.0, situated right next to Peppy, and having minor border skirmishes with r/osuplace throughout her existence there. Despite these minor squabbles however, osuplace generally let the VA-11 HALL-A community have Dana's "BEST BOSS" text overlap with their border.

Dana was damaged during raids from xQc, first losing a small part of her hair when Peppy was overriden with xQc's logo, followed by having her entire body destroyed by the Void when it emerged as a side effect of xQc hijacking the Blue Corner. As an anti-Void measure, her body was temporarily remade with a grey suit, before the background was filled in with light blue, and a light green border was added. Dana would then survive unscathed until the Great Whiteout.

Looking for more to do, the VA-11 HALL-A community then found a newly-opened spot between the Flag of Israel and keqLove. Seizing the opportunity, they made a scaled-down version of the game's logo, as well as the logo for the messageboard danger/u/. While the danger/u/ logo would later be taken over by Cake Face and forced to relocate to Jill's room, the game logo would go on to withstand a raid from the Flag of Romania, and survive in its original location long enough to see the Great Whiteout.

Through collaboration with the Girls' Frontline community, empty black space in between Peppy and the other smaller pieces was filled in by the Sugar Rush and Piano Woman, two drinks in the game that the player can make and serve. The drinks would have a relatively peaceful life--although the Piano Woman was raided once--and both would survive until the Great Whiteout. In creating Jill, the VA-11 HALL-A community collaborated with multiple smaller communities by adding them as wall decorations.

The final project, undertaken by the VA-11 HALL-A community--and assisted by the Girls' Frontline community--was their largest, as sought to recreate the main character, Jill, sitting at her kotatsu in her home. In the process of creating the art, some smaller projects were displaced, but collaborations with Men I Trust, Rust, the Campfire and the Rainbow Slime would see them be integrated with the art by making them into assorted wall hangings. Jill and the associated decorations would have the most peaceful run out of all of the VA-11 HALL-A projects, not seeing a single raid after completion until the Great Whiteout.

No VA-11 HALL-A-related artwork appeared during r/place 2017. However, u/SnivyChara did make a post to r/waifubartending with a design, and had proposed to add it to the canvas.[1]