Julianne "Jill" Stingray is the protagonist and player character of the 2016 indie video game VA-11 HALL-A; Fore is her pet cat. They first appeared on the third day of the r/place 2022 canvas.

Many iterations of the template were made, in response to space constraints and collaborations with smaller communities. 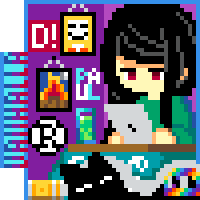 Proposals to add Jill to the canvas existed as far back as 2017, but the Operation Bad Touch Discord server only started to earnestly consider proposals early in the third day, with the anticipation of the second canvas expansion. Users MysteryPig and Sodapone quickly got to work drafting templates, with MysteryPig coming up with an original design, and Sodapone opting to replicate the spritework in-game. Other members of the server gravitated towards Sodapone's design, and their template was chosen. MysteryPig further contributed to Sodapone's design by adding Fore underneath the kotatsu.

The template had to be redesigned numerous times due to space constraints at the canvas, as well as various diplomatic negotiations that resulted in what was initially a barren wall being filled with a variety of wall decorations. The finalized design was completed towards the end of the third day, well after the artwork on the canvas was completed. 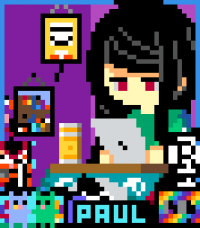 Work began almost immediately after the second canvas expansion, with the beginnings of the border being laid out at 54:29, at (640,1650). However, other groups were able to secure their borders faster, and the VA-11 HALL-A community hastily relocated to (550,1550) instead. Assistance to the project was provided from the Gacha Alliance, with the Girls' Frontline community in particular providing extra manpower.

Progress was slow at first, and hampered by the Void passing along the right side--the progress was slow enough that some other smaller communities had already filled up the planned space. Through negotiation, the VA-11 HALL-A community was able to get some of these projects to relocate, while also working out a deal with the Men I Trust community to integrate Humming Man as a painting on Jill's wall. Further negotiations were made to incorporate the Campfire as another painting, followed by the Rust community as a sticker, and, finally, the Rainbow Slime, by putting it under the kotatsu with fire.

Two pieces of artwork were displaced with force; one of which, the PAUL text, was displaced by force to make room for Fore. They continued to attempt a resistance, placing light blue pixels on him over the next few hours. Seeing this, Sodapone felt guilty, and decided to add the PAUL text as another sticker in the template. This was completed on the canvas at 66:25.

One more change to the artwork was the replacement of the beer can on Jill's kotatsu with a Bad Touch, a cocktail from the game, named after the Bloodhound Gang song. This was added as a "calling card" for Operation Bad Touch, the Discord server on which most of the VA-11 HALL-A community's efforts were coordinated.

Among Us crewmates in the drinks. The finalized appearance of Jill on the canvas.

Jill during the Great Whiteout.

After completion, Jill would have a very peaceful existence on the canvas, not seeing a single raid, although experiencing some minor vandalism. There were points where both the beer can and Bad Touch on her kotatsu had Among Us crewmates drawn onto them.

Towards the end of r/place, users started trying to put a blush on Jill. Initially the community condoned this, until users then started trying to give her an open mouth as well, reminiscent of an "ahegao" face. From there, making her blush was banned by the project leaders, and community members would try and remove the blush whenever possible. However, attempts from other users to make her blush continued until the Great Whiteout; ultimately, a small blush did make it onto the final art, as well as a mouth.

Due to her relatively peaceful location on the canvas, Jill was among the last of the artwork to be destroyed in the Great Whiteout, with her last pixels being blanked out at 83:13. The artwork on the canvas is a scaled-down replica of Jill sitting at her kotatsu.

This artwork is based directly on the screen in-game that appears in between workdays, depicting Jill sitting at the kotatsu in her home. Earlier iterations of the template design incorporated other elements of the room; such as the sticky notes on the wall, the sliding glass door leading to the balcony, and the SLUT shirt on a clothes hanger. The other smaller artwork as wall decorations have a legitimate background in the game, as one of the game's mechanics involves buying various decorations for Jill's home.