Babymetal (Japanese: ベビーメタル) (stylized in all caps) is a Japanese kawaii metal band. The band consists of Suzuka Nakamoto as "Su-metal" and Moa Kikuchi as "Moametal". The band is produced by Kobametal from the Amuse talent agency. Their vocals are backed by heavy metal instrumentation, performed by a group of session musicians known as the "Kami Band" at performances. 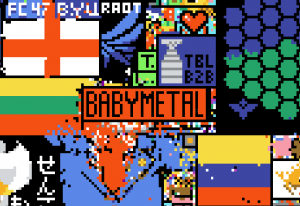 Drawing started on the first day next to the Foxhole community to the right, with a lithuanian flag comming fast from the left to close the gap with Foxhole artwork.

The first objetive for the community was to get a tight rectangle to write "BABYMETAL". To do this they had to push Lithuania out of the zone. At the same time the Wall Street Bets subreddit community was building from below, and according to their design they would intercept part of Lithuania, Foxhole and vanish BABYMETAL.

Later, Lithuania agreed to concede part of its territory and BABYMETAL community completed the rectangle with text. 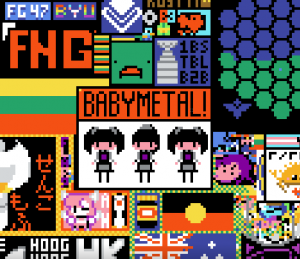 Wall Street Bets (a.k.a WSB) community was trying to push from below and soon after received help from its ally, the Osu community. The result left the BABYMETAL rectangle in shreds, but the attack also hit on the Foxhole community and triggered a three-way alliance with Lithuania to drive WSB out of the area. This would ultimately be achieved after the efforts of the Osu alliance were exhausted. Senko community (r/SewayakiKitsune) also helped from the south to push WSB out. Upon defeating WSB, the BABYMETAL community expands downward to make the canvas for their artwork. The artwork was completed on the early hours of day 2.

While the WSB battle was taking place, part of the community tried to draw second logo a few pixels away and below, near the Osu logo. Second logo was almost finished, but then an attack directed towards Osu by a streamer wiped out the zone. Efforts were redirected to the 1st Artwork. 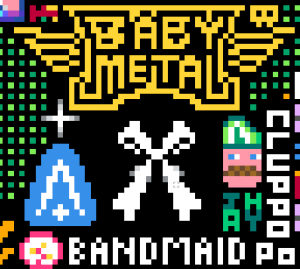 The community joined with r/BandMaid to build the cover artwork of BAND-MAID album World Domination. When completed, r/BABYMETAL built its own logo above this artwork. Soon after, contacts were established with the local neighbors, first with Twitch streamer Jhay (Luigi artwork) and later with r/Astroneer (blue triangle logo). Both agreed to an alliance. The upper border was held by Green Lattice which was a partial ally, but mostly neutral. After completion there was an attack of the void that was steadly repealed by the alliance.

This entire region was wiped out by streamer xQc during a void raid on the canvas. However, the reconstruction was swiftly completed without issues.

On day 4, the only menace was a forthcoming expansion of r/MKD flag, which was stopped by diplomatic agreements. 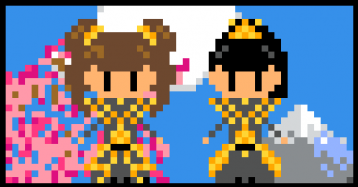 Uppon the second expansion of the canvas r/BABYMETAL decided to build under the second artwork of its ally Foxhole. Below the space intended was an expanding Lithuanian flag that started take over the build zone. Contacts were made with r/lithuania, which was ally since day 1, but the flag was ultimately being build by twitch streamer Lturepublic.

Diplomatic contacts were made with the streamer, but he responded with a lack of interest in cooperating despite the alliance with r/lithuania and instead chose to trash the artwork persistently. Nevertheless, the area would eventually be taken over by r/BABYMETAL.

On day 4, Lturepublic started pinching around the 3rd Artwork as he was doing since the design was completed, but this time his audience has been instructed to create reddit accounts and they rapidly outnumbered the defense.

At the same time part of the r/BABYMETAL was defending r/BandMaid from a persistent invasion from r/MKD, so ultimatly was decided to abandon the 3rd position.

During the assault on the 3rd Artwork, Lturepublic decided to log into the r/BABYMETAL discord server while doing his livestream to brag about. His moderator also posted the public invite link in the livestream many times. This ultimately prompted some of his audience to do the same. In a very brief period of time, new users began to send offensive messages, or against the rules of etiquette of the server. This action was considered a raid by r/BABYMETAL, and some users went to report it on twitch.

Four hours later after the server raid, Foxhole community announced an operation to retaliate against the streamer by taking the spot were he was drawing his logo. The attack known as "Operation Thunderclap" was set to start at 01:00 UTC, with the objetive of build a Sabaton (swedish metal band) artwork. r/foxholegame, r/BABYMETAL, r/Sabaton and others were part of the operation, but also Osu community was ready to defend the artworks they have commited. 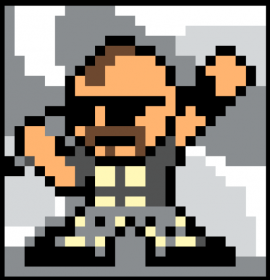 Lturepublic knew about the attack and decided to move first launching an attack on the 1st r/BABYMETAL artwork, but was quickly repelled with the help of Osu. As this move left their defenses empty temporarily, Foxhole decided to counterattack immediately. This decision ultimately was the right one as the operation was prompted 30 minutes early, and since it was not known at what time the event would end, it gave the possibility of reaching the goal.

An hour and a half later, the Sabaton logo was finished, just about 30 minutes before the end of the event. 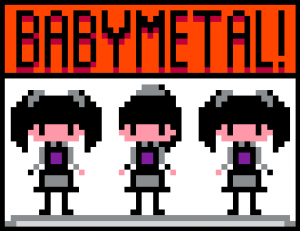 This artwork is a recycled version of their place 2017 artwork. The artwork depicts the original lineup of BABYMETAL: Su-Metal, Yui Metal and Moa Metal. Compared to the 2017 version, the color scheme was changed to gray to represent the last costumes used by this lineup. The design was improvised on the fly, there was no prior agreement from the community.

The artwork depicts the logo of BABYMETAL with the color scheme of their album Metal Resistance. There is also a white cross that represents a star, as a tribute to Mikio Fujioka✝, backing band guitarist for BABYMETAL.

The artwork depicts a mini version of the logo of Sakura Gakuin, positioned next to Band-Maid. The logo was made by r/BABYMETAL without the involvement of Sakura Gakuin subreddit. 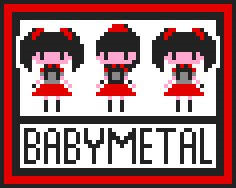 The artwork depicts the original lineup of BABYMETAL: Su-Metal, Yui Metal and Moa Metal. The red&black costume is the their most iconic over the years. 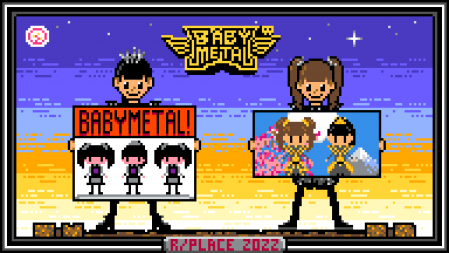