Realm of the Mad God (RotMG) is a 2010 free-to-play permadeath bullet hell MMO for Windows and macOS, developed by Wild Shadow Studios and currently maintained and published by DECA Games. Originally written for Adobe Flash, the game client was remastered using the Unity game engine and re-released in 2020 as Realm of the Mad God Exalt. The player finds themselves in a world ruled over by the Mad God, Oryx, and alongside other players must defeat Oryx's minions and improve their own gear, stats, and skill to eventually triumph over the Mad God himself.

The RotMG Nexus was created on the first day of r/place 2022. Depicting all 18 playable character classes, a "white bag", the head of Oryx the Mad God in his Exalted form, and Oryx's intern Craig, this area of the canvas was nicknamed the Nexus by the RotMG community, after the game's hub area. Additionally, as part of a collaboration with r/placeDE, the boss Archbishop Leucoryx holds up the Autobahn road sign right next to this area.

The Nexus as it appeared on the "final" canvas, right before the Great Whiteout.

Although it remained intact for the overwhelming majority of the time on the canvas, the Twitch streamer Im_Dontai attempted to claim the area approximately 16 minutes before the Great Whiteout, resulting in the Nexus being severely damaged. 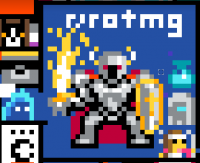 The area that featured Oryx the Mad God 3.

On the second day of r/place 2022, the RotMG community claimed an area within the new canvas expansion. The main project in this area was the final boss of the Oryx's Sanctuary endgame dungeon, commonly referred to as Oryx the Mad God 3, displayed in his Exalted form. The area also depicted a Potion of Life, a Tier 3 Gravestone (which was modified to display an Among Us crewmate), Oryx's intern Craig, and a Wind Flower, a cosmetic skin for the Ninja class.

At 39:51, the YouTuber and Twitch streamer Karl Jacobs, on his alternate Twitch account karlnetwork, directed his audience to create the character BMO from the show Adventure Time on top of this area; as a result, the artwork here was lost.

The area that featured the Forgotten King and the Shattered Queen.

On the third day of r/place 2022, the RotMG community claimed another new area within the new canvas expansion. This area mainly depicted the Forgotten King and Shattered Queen, who are two bosses found within the endgame dungeon The Shatters. The area also featured a Tier 3 Gravestone, hearts drawn between allied neighbors Everhood and Portugal, and a Triforce to symbolize the alliance between the RotMG community and r/Zelda. This artwork remained fully intact until the Great Whiteout.