Connorplace is a small group of MCYT / Twitch fans, largely coming from Discord and Tumblr, who worked together to build the main three members of Schlatt & Co. from SMPLive within the r/Technoblade heads.

The name Connorplace comes from the fact that they initially came together to build ConnorEatsPants’s Minecraft skin, in order to complete the Syndicate. They expanded later on. 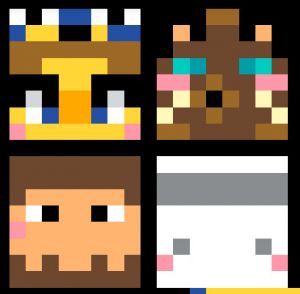 Connorplace's sole artwork was a group of three Minecraft heads meant to represent the three main members of Schlatt & Co., a fictional company from the now-defunct Minecraft server SMPLive. These three heads being the heads of ConnorEatsPants, jschlatt, and IAmTy.

On day 1, Tumblr user timedeo made a post asking people if they would be interested in building ConnorEatsPants on r/place, and many people said they would. Because of this, he made a makeshift Discord for the group and set out to ask r/Technoblade for permission to build in their territory, offering help in protecting Wilbur from the then-ongoing Among Us invasion in exchange.

r/Technoblade gave permission, and the group began work building Connor next to Wilbur, fending off the Amongi in the process.

On day 2, the group decided to build jschlatt under their current image. However, Fundy was currently being built there. Since Dream was trying to be avoided as he made the wider area a target for griefers, they suggested that Fundy be built over the Dream head that people were trying to build, and then they built Schlatt in his place.

Later a streamer named Kamet0 began attacking the bottom left corner using bots, turning it into his logo, completely devouring r/Technoblade and Connorplace’s allies such as Jerma in the process. Kamet0 spared the Minecraft heads as he thought the little blush marks on their faces were cute, though r/Technoblade & Connorplace still disliked him greatly for attacking their allies.

After a long amount of failed negotiations involving a convoluted plan to switch multiple heads around, with Connorplace’s end goal to be to build IAmTy next to Schlatt, they decided to take matters into their own hands, replacing the random head that was currently there with Ty’s.

Ty’s head would later be griefed by Twitch streamer Highkeyhateme, who wanted to turn it into his own head. Serilly was already stressed from other things and went into his chat to desperately beg for them to stop, which he and his mods ignored and ridiculed. Any r/Technoblade or Connorplace member who asked him to stop in chat was timed out by the mods.

Seeing that negotiation wouldn’t work, Connorplace went full defense mode and drove off Highkeyhateme and his viewers with the help of their allies, though he would return to mess with other heads unsuccessfully.

By the end of it, after having a discussion with Krinios and some others, he seemed to have understood why people were upset by the griefing and left the heads alone.

ConnorEatsPants saw the original build of his Minecraft head on stream and commented on it. The build made it into a video on his stream highlights channel.

IAmTy talking about his head on r/place.

IAmTy commented on his head being built on r/place on Discord, saying he appreciated it.

Hilariously enough, the Connor head somehow ended up highlighted in an article due to a tweet that was chosen to be used.

A few pieces of fanart about Connorplace have been made by users on Tumblr. These fanart pieces often also include Antfrost, since his head was next to the Schlatt & Co. art.