Republic of Slovenia is a country in Central Europe. It is bordered by Italy to the west, Austria to the north, Hungary to the northeast, Croatia to the southeast, and the Adriatic Sea to the southwest. It is mostly mountainous and forested and has a population of 2.1 million people. Its capital and largest city is Ljubljana located in the centre of the country.

In June 1991, Slovenia became the first republic to split from Yugoslavia and become an independent sovereign state. It joined the European Union and became a NATO member in 2004.

Discussions on where to place a mark started in the very beginning, with members quick to notice the start of the Slovakia flag being created.[1] It was quickly decided to create a Slovene flag next to the Slovakian one, since they both share the same colour pattern, the same was thought by Croatia who started at about the same time. Serbia also joined shortly after encountering problems with their first flag being mistaken for the Russian one and being griefed multiple times. Croatia suggested that a heart be placed in the center of the borders to commemorate their friendship.[2] Despite multiple attempts to create additional artwork on the r/place canvas, the Flag of Slovenia is the only one which survived to the very end.

The first and main artwork of r/Slovenia located at 288, 879, next to the Slovakia flag. Originally shorter in size, it expanded to the left of the German coat of arms towards the end of day 1. It was involved in a border dispute with Germany and was the target of a territorial expansion by the Cool S.

After the completion of the Flag of Slovenia users began discussions on what other art should be made on the canvas. Two main ideas were proposed, unfortunately both did not see completion.

At the second canvas expansion plans were made for a second Slovene flag, which would include a depiction of a ski jumper and the subredits name on it. Located at (320, 1774) the flag was fully completed with the foundation pixels being layed for the ski jumper, until it was completely overrun by the naked Roblox character artwork organized by Mexican YouTuber Quackity.

A new location was decided upon, (1160, 225) taking over a portion of the 777 artwork made by streamer Bananirou.[3] This attempt was foiled by the sudden Turkish flag expansion organized by streamers and priority was shifted towards helping to defend the Czech flag. The Turkish territory was to be split amongst members who helped fend off the attack, but the whole area was covered by the The Tortoise Trainer.

Towards the end stages of r/place a last attempt was made to create a piece of art in the new expanded canvas, but it failed due to insufficient manpower. 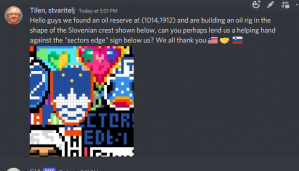 A Slovene diplomat asking for help on the American discord 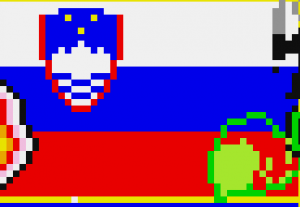 Slovenia holds a flag on the 2017 canvas which was created on the second day of the event and is located above the first European Union flag. A Linden tree leaf, a very prominent symbol in Slovene history and culture, was being constructed at the bottom right corner in the last hours, but failed to complete so only half of it is visible in the final canvas.