Project Moon is a South Korean indie video game development company, most commonly known for their games, Lobotomy Corporation and Library of Ruina.

This multimedia series created by Project Moon occurs within their uniquely created world, dubbed as the "PMVerse" by fans, in which the remaining billions of humans in said world have been reduced to living within "The City", a dystopian metropolis spanning around tens of thousands kilometers[1] due to an unknown cause.

During the 2022 /r/place event, the Project Moon Community struggled to leave their lasting impact on the large 2000x2000 canvas, and was successful, even if some projects did ultimately end in failure. 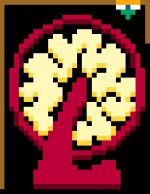 The logo for Project Moon's game Lobotomy Corporation. The community's third project, after the first two were destroyed. Initially a lot more simple, but the community decided they wanted something more grandiose, and added shading to it.

This project actually came into existence after the second project's initial destruction, but before the attempted (and failed) retaking of the second project's area. It was decided that in order for the community to be less easily targeted, that they would build the Lobotomy Corporation logo instead. Being a different design it would be significantly less recognizable to their attackers, and therefore, would be less likely to targeted and destroyed. It lasted until the final day, right up until the final canvas blankening.

A tiny version of the Project Moon logo, built in secret with help from the Indie Alliance, and the fourth and final project by the community. This was even featured in a Kotaku article![2]

The logo for Project Moon. Was attacked several times by multiple streamers, and even iFunny, but ultimately did not make it into the final cut.

The Project Moon Community made several alliances over the course of the event, most of them remaining relatively positive, or neutral. These allied communities include, but are not limited to:

However, they also made two enemies during the event, of which these were:

The main alliance for the Project Moon Community was called the Moonframe Alliance, which was initiated when the Warframe and Project Moon Community allied with each other in an attempt to gain protection from attacks by aiding each other. This, however, did not really work, as the second attempt at the Project Moon logo (along with the Warframe logo above it) was placed in a somewhat unfortunate position where it and its allies were under constant siege from multiple streamers. Despite several successful defenses from several attacks, and even a siege from the iFunny Community that lasted for over 24 hours being successfully repelled, the Project Moon logo (and Warframe) was eventually hit by an attack that could not be defended against, with two streamers completely wiping it out, and rendering it impossible for the alliance to repair their work within the area.

There was an attempt to take back the area after it had been run over, but it was too much for the alliance to fight against, and they ultimately had to abandon this second project.