The iDKHOW logo, built by r/idkhowbuttheyfoundme and the band's Twitter community, is an art piece on r/place 2022 representing the musical duo I DONT KNOW HOW BUT THEY FOUND ME (often abbreviated as iDKHOW). The logo presented on r/place consists of the abbreviated version of band's name along with the color palette of their first EP, 1981 Extended Play, and their first full-length album, RAZZMATAZZ. After multiple relocations, the band logo has found its place as part of the North Green Lattice.

Throughout its building, the iDKHOW logo has gone through multiple alliances, primarily with other musical groups.

The creation of the iDKHOW logo began on Twitter, where the idea was presented and given a design. The build began later during the first day of r/place. Whilst small, the logo has an extensive history of negotiations and conflict.

Firstly, attempts were made to take over a small portion of large builds, but were unsuccessful.

At this point, word of efforts to build the band's logo had spread to around Reddit and Twitter. Whilst still a small number of people; with the expansion of the canvas, the fandom was able to construct the full logo in an empty space. 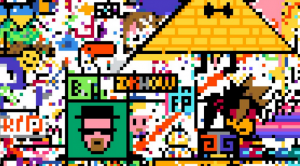 Photo showing the first time the iDKHOW logo was ever fully built.

Overall engaging in minimal conflicts, the logo was initially under constant fire by the FP logo and text destroyers. Luckily, the FP logo moved downwards to make space for iDKHOW after noting continuous resistance. However, this was not the end to the conflict, as iDKHOW was steadily encroached by the ever-growing Bill Cipher, and the expansionist desires of the Breaking Bad tribute, which eventually devoured the iDKHOW logo.

iDKHOW found its place a few pixels higher, in the midst of the r/placetrees' territory. Negotiations were made to ally with the Trees, and initially were successful, with news that the iDKHOW logo would be integrated into the Trees. However, a reddit post restating this fact faced scrutiny after being told that the alliance was revoked, and the iDKHOW logo once more sank into disparity.

Confusion from the r/place iDKHOW discord sparked conversation, and negotiations once more continued, allowing iDKHOW to ally with r/placetrees and rebuild in a given area where it had to constantly rebuild itself, but remained until the next day.

The third and final day brought a devastating takeover by Place France. Unable to fight back, there were multiple searches conducted to find a new area, with discussions of allying with Trans Place due to a large amount of the iDKHOW community identifying with the LGBTQ+ community.

Poster showing allyship and mutual defense between iDKHOW and other bands on r/place.

After multiple discussions and the discovery of musical groups such as Car Seat Headrest residing in Green Lattice, plans were made to move the logo towards the aforementioned area and were built with ease. Under the protection of Green Lattice, strong alliances in exchange for mutual defense were formed with multiple other bands.

The iDKHOW logo, with originally three members, had managed to accumulate over seventy people to help finish it's build. Whilst presenting as a small artwork, the logo stands to represent the dedication and collaboration throughout the iDKHOW community.