Kimi ga Shine -Tasūketsu Death Game- (Japanese: キミガシネ -多数決デスゲーム- lit. "You Shall Die -Majority Death Game-" unofficially translated as "Your Turn to Die: Death Game by Majority"[1]) is a Japanese episodic horror adventure game first released on 28 August 2017.[2] The game was developed by Nankidai, a manga artist; and was later adapted into a manga and light novel, which were both released in 2021. An unofficial English translation under the title "Your Turn To Die -Death Game By Majority-" was released in 2019.[3] Due to the game not being translated to English yet in 2017, it did not have a chance to appear in the original r/place canvas. However, over the years as the game became translated and gained popularity in the west, mainly from visual novel fans. By April 2022, the official subreddit r/yourturntodie subreddit had gained more than 20,000 subscribers. The your turn to die community has a fair presence in r/place 2022, with up to three different spots, including one that is 40x40 pixels big (which is very large compared to the size of it’s community). Being an indie game, it was also a member group of the indie alliance, though it joined later and was not a founding member.

Most of the coordination was done in the discord server known as “CHIDOUINS UNITED <3”, with some help from the main r/yourturntodie server, as well as the community of the youtuber KGOkev, also known as “Botsun Reviews!”. For the duration of r/place, members of the community who helped contribute often referred to themselves as “Chidouins” , after the original name of “yourturntodieans” was deemed by many users as sounding terrible. The term “Chidouin” comes from the Last name of the main protagonist, “Sara Chidouin”. The server was founded by reddit user u/-quakey- (known in discord as Togz), who acted as owner and de jure leader through. She is the one who originally proposed building a picture on r/place. Another leader was u/hytesy, who is the owner of the main r/yourturntodie discord server. She joined after assistance was requested from the server for users to help in r/place, and decided to greatly contribute herself. Another admin of the server was u/CluelessInABox, however the user decided to leave on the 4th of April due to an inability to help any further. On the final day, the largest youtuber/streamer of the “your turn to die” community by the name of KGOkev decided to come and help with r/place, where he streamed on youtube for several hours in order to help defend and build a fourth character. He helped contribute a significant amount of people to defending artwork, with an estimated 60-100 viewers.

The first and main artwork created by the community was a 39x39 portrait of Sara Chidouin from the game. Sara is the high schooler main protagonist of the game, where she is kidnapped and forced to play through a mysterious game where failure can end in death. Her main skill in gameplay is winning arguments using logic and evidence. Construction began in earnest on the second of April, as the subreddit was busy with a subreddit switch April fools prank during April first with r/DDLC. An official mod announcement was posted on the subreddit to get users to support the project. It was initially envisioned to be put on the bottom left corner of the canvas at (23,930). After negotiating with neighboring communities for the space, it was initially going well and seemed like having a good chance at being built. However, just as construction was only just starting, the void appeared at the very bottom left of the canvas sometime around 25:56 and began to destroy everything in its path. 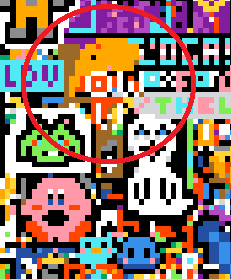 The portrait of Sara was destroyed, and construction was halted. The Chidouins planned to wait until the void dissipated to rebuild, however as they were waiting an entirely new canvas emerged on the right. The Chidouins quickly moved to secure a spot at (1838,119) as their new home thanks to a user’s recommendation. After peaceful negotiations with several neighbors, as well as several wars (including the now infamous “battle of Sara’s tears”), Sara was able to successfully be built at the location. She was able to stay there until the very end of r/place, and undergone some changes in her design along the way, both intentional and not. ultimately the presence and perseverance of the portrait is a massive success for the community and kept morale extremely high for the community for the duration of r/place. 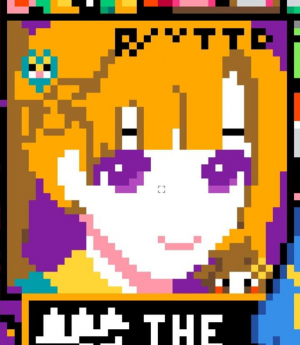 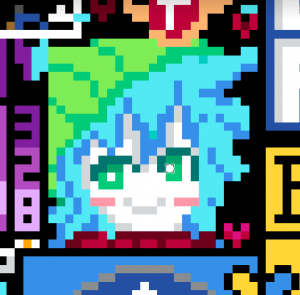 The next artwork created by the community was a smaller 21 x 25 portrait of “Sou Hiyori”. Sou is another character from the game who is a participant in the same death game as Sara. He is infamous as the “troublemaker” of the group, as his actions lead to a lot of difficulties for the player. This trait also makes him a fan favourite among the community so he was naturally suggested to be put on the canvas. After the second expansion of the canvas, the community quickly began claiming space starting at (447, 1880) as the top right corner. Initially there was a plan to work together with the danganronpa, ace attorney, and doki doki literature club communities to make a collaborative art piece containing the troublemaker character from all 4 franchises. The plan failed, and the community decided to downscale to a simpler picture of sou. Construction began on the same spot where the collaborative work was original going to be, however, it turns out the location was also coveted by the Winnipeg jets. After making a deal with them, it was agreed that Sou would be moved upwards to avoid each other’s locations. Sou was successfully built and was maintained till the end. 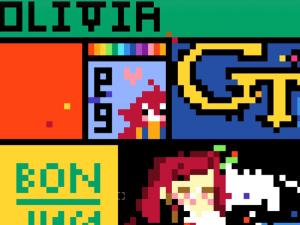 Nao was never planned by the leader, but a group of users independently made a small square featuring her at 1537,1327. She managed to stay for a while, however she was destroyed when the streamer fatty alien came and took her spot. Gin meanwhile, was being planned by the youtuber KGOkev, and was initially going to be built on top of the “flair wars” logo. The Flaor wars community was accused of grieving surrounding artworks, causing it’s neighbors to invite the Chidouin’s in to destroy them together. However, after negotiating, they claimed to have never grieved anyone and it was a big misunderstanding. It was agreed to move the gin and leave the logo after peace was reached. In the end, both nao and gin were put to the right of Sara, with permission from the owners. They remained there until the end.

The Chidouins made strong alliances with the following factions:

The Chidouins were also friendly and on good terms with: