Although 5 years ago the vegan communities had made a lot of artwork, this year the primary goal was activism.

1st Dominion banner, between the hearts and the Formula 1 teams

Vegan r/place had humble beginnings. With only a few dozen dedicated people they managed to secure a spot. They had to fight with the place hearts and the F1 community at first but later came to an agreement. The end of this banner was caused by a car streamer writing "FORZA FERRARI!!" on the banner.

vegans and 100 gecs vibing together

Vegans formed an alliance with 100 gecs here. However the banner was half destroyed by UK colonialism.

Here they formed an alliance with Nyan cat and furries, got digested by the void then they undigested themselves. This banner was destroyed because it was abandoned after the first canvas expansion happened. 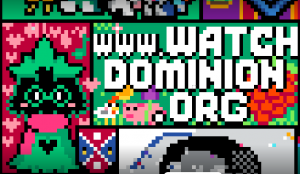 Deltarune(left and top left), Raspberry(behind the text) and The Expance(sorry i forgot to include you in the screenshot)

After the expansion the troops moved over to claim a new and bigger spot. A new alliance was also formed; a streamer called Tsumyka's community. They wanted to make the logo of their discord server on the canvas. So they worked together. The banner had at first another link besides Dominon: dontwatch.org. However, the community decided that watchdominion.org is a better and more objective documentary than dontwatch.org and it was removed from the banner. Instead, the Dominion link was made bigger. Alliances were also formed with r/deltarune and r/TheExpance. This banner was later wiped out by german colonialism.

The vegoons moved to above the blue corner, taking thee raspberry with them and formed an alliance with The University of Connecticut, who made a husky pixel art. This banner survived till the end. 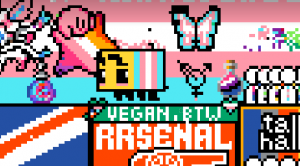 The Go vegan was changed into "Vegan, btw" (because that's funnier, it's a gimmick from the subreddit r/vegancirclejerk) by attacking a bri'sh restaurant called greggs. An alliance was formed with r/transplace. Later the banner got wiped out and greggs took the place back.

This QR code led to watchdominion.org. It did not survive until the end

The 2nd expansion happened so an even bigger banner was made on the new land. Alliances were formed with the tiny turtle in the left bottom corner, and a penguin who was placed in the second O in "Dominion". Pepe The Frog suddenly appeared on the banner and started petting the cow. The vegan r/place discord server decided to not fight them and let them pet the cow. Later when they left they made a memorial in the form of a frog pixel art.

This banner was the largest banner and survived until the end.

The QR code leads to: youtube.com/watch?v=C1vW9iSpLLk

It survived until the end.

The QR code led to: landofhopeandglory.org

It was later changed into the 4th QR code.

The QR code leads to: www.youtube.com/watch?v=rS0F4WeG0eo It was at first on the left of the 2nd QR code but was destroyed by a streamer. It was moved to the location of the 3rd QR code. This QR code survived until the end.

impact on Dominion views during r/place

The r/place activism has created: 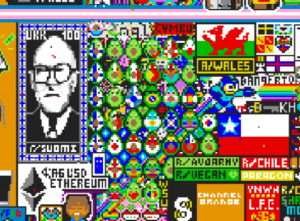 In 2017 r/place vegans made a sign saying r/vegan. They allied with r/avoarmy.