Canada is a country in North America, officially founded as a confederation in 1867. With a total land area of 9.98 square kilometres (3.85 square miles), Canada is the second-largest country in the world. Its ten provinces and three territories all border the United States, forming the longest land border in the world, spanning 8,891 kilometres (5,525 miles). The capital of Canada is Ottawa, and its three largest cities are Toronto, Montreal, and Vancouver.

r/placecanada was the largest Canada-related community operating on r/place, both in 2017 and 2022. 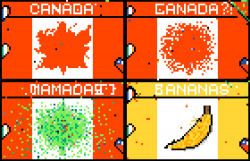 The first Canadian flag was one of the most griefed pieces of artwork on r/place.

PlaceCanada started work quickly on adding a Canadian flag to the canvas, with evidence of the flag's emergence going as far back as 00:37. However, hastiness, coupled with a lack of coordination resulted in a poorly-proportioned maple leaf that would remain as such for the next eight hours. This struggle was noticeable by other r/place users to the point where memes were made; this exacerbated the issues PlaceCanada had with fixing the maple leaf, as random users would intentionally grief it for fun. By the end of r/place, heatmaps would reveal that the pixels making up the maple leaf of the flag saw some the highest traffic out of any pixels on the canvas.

A commonly-recurring griefing attempt was to try and make the maple leaf green, likely as a reference to Canada having legalized recreational marijuana federally in June 2017. None of these attempts would ever successfully turn the maple leaf green, however; instead, replacing the leaf with an amorphous green blob. A successful griefing attempt starting at 43:17 would see the "CANADA" text turned into "BANANAS", followed by the maple leaf being replaced by a banana, which was in turn followed by the outer fields and background for the header being turned yellow. When TagPro was forced out of its position above the Canadian and Chilean flags, the Canadian flag expanded upward to temporarily create a duplicate Canadian flag; this duplicate flag was, too, temporarily turned into a banana flag. A raid would see this duplicate flag temporarily replaced by Pickle Rick and Graham, before the space was reclaimed and made into the Canadian Provincial & Territorial Flags.

While it continued to face frequent griefing attempts for the rest of r/place 2022, the first Canadian flag was able to stay mostly intact by the Great Whiteout, with only a few misplaced pixels by the end.

r/placeDE created their own maple leaf under the second Canadian flag.

The pixels of the second Canadian flag were first laid at (1645,1074), at 55:47. This flag would see a flag with a normal maple leaf created, but at 61:16, it was raided, and turned into a Peruvian flag. This new flag of Peru would then invade its neighbours, including the German Flag directly underneath it. This raid would be short-lived, however; and the Peruvian flag was destroyed as quickly as it had been formed. As the space was reclaimed, r/placecanada attempted to bring back the maple leaf to establish their territory, but the leaf was once again getting griefed--it was at this point when r/placeDE made its own maple leaf with the German tricolour, to make fun of r/placecanada. With the sides of the flag missing and the maple leaf being a blob, the second Canadian flag was ultimately overrun by 72:48. In response to this, the maple leaf on the German flag had its colours changed to those of the Canadian flag, with a red heart in the centre.

The third Canadian flag was made in collaboration with r/placeNL.

Canada and the Netherlands have had strong diplomatic relations ever since the former helped free the latter from German occupation during the Second World War. As a result, r/placeNL and r/placecanada collaborated to create a third Canadian flag next to the second Netherlands flag, with the Groesbeek Canadian War Cemetery acting as a border between the two. This flag had a much more peaceful existence than the previous two--albeit still having its maple leaf griefed--and survived until the Great Whiteout.

Throughout 2021, numerous unmarked graves were discovered around the sites of former Canadian Indian residential schools, a system of boarding schools directed by the Canadian government and typically operated by Christian church groups that ran from 1876 to 1997. These schools were created and operated with the goal of isolating Indigenous children from their communities and cultures, and forcibly assimilating them into adopting European cultures instead. Physical, mental, and sexual abuse were rampant at all of these schools; and many children died, most often due to tuberculosis. The discovery of these unmarked grave sites made it clear to Canadians how uncaring and genocidal the residential school system was, and this started a new dialogue and wave of anti-nationalism in the country.

Because of this, at the same time as the first Canadian flag's creation, r/placecanada also created and maintained an orange box with the text "EVERY CHILD MATTERS" on it, as well as a heart with the colours of a medicine wheel, a contemporary symbol of Native Americans and First Nations. While most communities were respectful of it, the MAP community raided it at one point and replaced the colours in the heart with the stripes of the MAP pride flag. This was short-lived, however; and the artwork survived to see the Great Whiteout.