r/PictureGame is a subreddit dedicated to playing a succession game, where each post is a round and the winner of the round posts the next round. Rounds are often geographical identification, but can also include other kinds of Googling research or puzzles.

r/PictureGame created two pieces of artwork for r/place in 2022:

The background is the subreddit logo (blue sky, green grass, some gray mountains in the middle, with a question mark. The outline of the birb (as it is affectionately referred to by the subreddit) is a subreddit symbol, being part of several members' Discord avatars in order to mimic one particular user's avatar. The user based the avatar off Mogura from Nichijou. In the final artwork, the subreddit name can be read sideways above the birb. 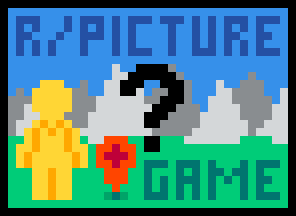 The frame contains the same elements of the subreddit logo, but adds additional mountains to form a mountain range. Additionally, a Google Maps pegman and pin are added, as a reference to the many geographical identification rounds played on r/PictureGame. The subreddit name is written in the background as well.

The r/PictureGame birb was one of the first completed artworks on r/place, with the basic outline completed less than an hour into the experiment, and the background by 1:50. As a result, it was highly edited outside members of the community, gaining additional features at this time, such as a beak, wings, and legs (making the bird look more like a toucan). The beak encroached on the westward neighbors in r/Superstonk, who built around the beak at the time. It was confirmed that the beak was not part of the bird's design, and by 2:30 the beak was subsumed by the Superstonk rectangle. Later, at around 8:30, a treaty was made with r/Superstonk to protect one black pixel at (908,825), in exchange for r/PictureGame members helping defend the general area from vandalism.

Attempts at writing the subreddit name were more difficult. Initially, the subreddit tried to write out the name in full (at around 3:46), but efforts were lost due to an advancing blue wall, which later would turn out to be the claim of WCUE. Additionally, r/fuckcars approached from the top, at 5:30, and placeDE's German flag continued past Superstonk's rectangle and served as a background for the birb. The OMORI community to the right would serve as the major power in the area, and borders with r/fuckcars and placeDE were established, as well as organizing the boundaries for the PictureGame birb and the WCUE cat. The background in the area was changed to white, to match the aesthetic of OMORI.

Since there was very little space to write the subreddit name in full, the plan was to create subreddits with shortened names that would redirect to the main subreddit. The first one, r/PicG, was written underneath the birb around 8:30. Some PictureGame members helped OMORI build a picture of Basil near the Austrian flag around 9:30. Hearts were made in the area between the PictureGame birb, the WCUE cat, and MEWO from OMORI to strengthen the alliance at around 16:00. The tail of the birb and MEWO were also joined up around then. A red hand from OMORI was squeezed in the remaining space north of the birb around 26:00, petting the birb.

For the first expansion, r/PictureGame was focused on securing the original area and did not create a new base. At around 31:00, the birb was entirely destroyed from a raid by the streamer dancantstream. While this was painful to see at first, it was also a blessing in that it allowed for the birb to be rebuilt in a slightly better position to give it a better shape. With the blessings of the OMORI planning crew, the birb was moved two pixels rightward as a result, and it also allowed for more text to be written at the bottom. As a result, the subreddit r/PicGame was created as a somewhat more descriptive name than before. Additional attacks by streamer xQc occurred at 38:30 and 43:30. The first attack cleared area north of the birb, allowing for the full text of the subreddit to be written in full, albeit sideways.

Further developments in the original birb were relatively minor; a heart between Scotland and r/PictureGame was created at (914,853) around 51:45. Instead, efforts were devoted to creating a second base in the second expansion area, partly due to fears of the original birb being blacked out by the void in the final hours of the canvas due to its now fairly central position of the canvas.

Initially, the plan was to stake out a claim next to PictureGame's good allies OMORI and Scotland around (1803,1565). However, there were several other groups also going for the same spot (OneShot's drawing of Niko, as well as a veganism ad). The veganism ad won out, and PictureGame had to look for a new location. (1351,1188) was suggested as a fairly safe location nestled between three country flags, though ultimately a group representing the VTuber Nekomata Okayu won out. The final location, at (1582, 1276) was also not without its struggles. Initially, the second Etika memorial sought to take the land, but eventually settled on drawing their rendition of Red Robin west of PictureGame's box. Also, Hytale wanted the land, but PictureGame fought for the land and won after settling with Hytale. The disagreement arose because PictureGame had already started developing the area over 30 minutes before Hytale, but Hytale contacted the local power One Piece earlier.

Due to the length of the battle, some other groups, such as the CSGO surf ramp and SynapseX started to draw in the area, but the conflict was resolved relatively smoothly. Additionally, PictureGame agreed to help relocate the CSGO surf ramp drawing (at around 60:30) to a different location. One person named Hopper also wanted to draw out their name in the canvas temporarily, which was completed at 63:50. Afterwards, the planned picture was slowly built and finished at 66:15. Other than that, the frame remained intact until The Great Whiteout, with only a few small attacks aside from fighting off minor incursions along the edge. PictureGame members instead helped out neighbors next to the frame, including helping clean up vandalism on Red Robin as well as helping Haskell southward of that.

Picture of all r/PictureGame art at (930, 663) taken two hours before the end. The face is an unrelated artwork, Hiveswap character Joey.

r/PictureGame created a small frame with the PictureGame logo around (930, 663). Also drawn by the community are the text and the remnants of a kiwi north of the frame, which was overwritten by Liquicity and Monstercat in the final moments of the canvas. The kiwi symbolized the large New Zealand presence in r/PictureGame, including the maintainer of the bot u/Provium.

Negotiations were made with: