This article is about the show and its community. For its representation on r/Place's 2022 incarnation, see Anne Boonchuy and Calamity Box.

Amphibia is an American animated television series created by Matt Braly that premiered on Disney Channel on June 17, 2019. The series features the voices of Brenda Song, Justin Felbinger, Bill Farmer, and Amanda Leighton. The third and final season premiered on October 2, 2021. It has a particularly close community overlap with The Owl House. 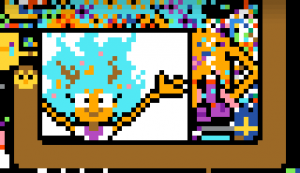 The final plan for Anne's placement on r/Place. It would eventually be revamped in the coming days after the colour palette expansions.

Before r/Place opened, there was some minor talk in both the Amphibia and Owl House discords about creating representation on r/Place after it was announced. However, these talks were relatively minor. A few hours before r/Place began, when the Amphibia discord announced its plan to place Anne on the canvas, a thread was created in the general channel of the discord for it. This thread would eventually have a large amount of its activity moved to the Animation Alliance discord in the second and third days.

From the moment r/Place opened, proposals in the community started in earnest as to where to place itself on the canvas. By around noon Pacific, the community had reached an agreement with The Owl House's community to place Anne next to Hooty. By around 3 hours past noon Pacific, she was complete. In the coming palette & canvas expansions, however, Anne would gradually become more detailed over time. Eventually, The Owl House and Amphibia's coalition would gradually grow to become the Animation Alliance. Subsequently, both communities then joined the Central Alliance. Anne and Hooty were both subjected to an attack by xQcOw on the third day; however, this attack proved futile against a massive spam of pink near the centre of where xQc's raid began, tricking him into believing there were bots in the area. 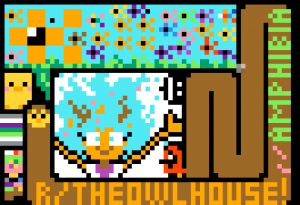 u/AnimReverted's plan to write r/Amphibia on Hooty. The r would eventually get capitalised after the plan worked, and eventually the colour would revert to dark green.

Not long after Anne was completed, the Amphibia and Owl House discords agreed to write r/Amphibia on a moderately sized stretch of Hooty. There were several disagreements over how r/Amphibia should be written, including its colouring. The original plan proposed by AnimReverted called for the "r/" part of the subreddit name to be pink and decapitalised, and the "Amphibia" part to be green, in reference to the two best friends Anne had on Earth in the show that got teleported to Amphibia with her, albeit in different locations. There were disagreements over how much of the text should have been pink or green, and over whether or not it should be two different colours at all.

At around night on the first day, the Amphibia/TOH coalition discord enacted a final operation to place r/Amphibia on Hooty; this was because all previous attempts had been foiled by what the discords dubbed the "Hooty hivemind," fans of The Owl House protecting the current incarnation of Hooty, and not following the proposed plans. It took two tries of this final operation to work. Once it did, though, the hivemind eventually removed the pink and replaced it with green, as well as capitalising the R and making the / in the same style as the slash on r/TheOwlHouse. An exclamation point was eventually added shortly after.

The plans that the Amphibia discord came up with to create the Calamity Box.

There were also plans to, after the final canvas expansion, create the Calamity Box from the show. The Calamity Box is a major plot device in the series, and so the Discord and Reddit communities decided to team up with the rest of the Central Alliance to create the box. Overlays came especially in handy, as around this time, they had been perfected for the entire alliance. Several hours after announcing the creation of the Calamity Box in a heavily chaotic zone, it was completed. The Calamity Box would survive being in the crossfire of at least one Twitch raid that occurred right next to it.